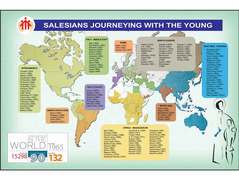 To understand the place of Don Bosco Youth-Net ivzw in this Don Bosco Movement, it is necessary to understand how the Salesian congregation is structured in the world:

The head of the structure is the General Directorate, with its president the Rector Mayor.  The General Directorate is divided into 5 departments: Formation, Youth Ministry, Social Communication, Missions and Finance/Administration.  These departments are managed through head offices, which are responsible for the follow-up towards the provinces.

The General Directorate is responsible for the overall management of the congregation.  The world is divided into regions (or conferences) coordinated by a regional.  Each region is divided into a number of provinces.

A province can be a state, regions within a state or a combination of (regions of) states.  The president of a province is the provincial.  The province has the same departments as the General Directorate.  The province is divided into ‘houses’ which are usually animated by communities of SDB.  The houses often host several local works.  These works include schools, vocational training centres, universities, student hostels, youth clubs, sports clubs, residential youth care facilities, youth shelters, parishes, spirituality centres, etc.

The network of people actively involved within the province, a house or a work is called an “Educative and Pastoral Community”: Educative, because they work within the educational style of Don Bosco, Pastoral, because they work from a faith-based background offering young people pastoral care and spiritual guidance, and Community, because it refers to all people which have a role in its work (young people and adults, parents and teachers or educators, religious and lay, representatives of other church and civic institutions and can also include representatives of other religions, men and women of good will).

The website of the Salesian Congregation gives a full introduction into the history, the General Directorate, the fields of work, the Salesian family, current developments and educational style of Don Bosco: http://www.sdb.org/.

The preventive system is a value-based educational system which was developed by Don Bosco during the 19th century.  It is the unifying educational basis for working with youth in the worldwide Don Bosco Movement.  This educational system has proven to be a successful model and inspiration for educators on different continents, in multicultural and multi-religious contexts over the centuries.  As such, its implementation is the point of reference and measure of authenticity for being part of the Don Bosco Movement.

Working within this global context it is important that the preventive system is adapted to the cultural context of each educational and pastoral community (i.e. provinces, houses, local works).  Therefore each province develops a “Provincial Salesian Educative and Pastoral Project”, which includes the objectives, strategies and guidelines for the Salesian work within that province.  This document then serves as a basis for each house or work to develop its own “Salesian Educative and Pastoral Project”.  This is an action plan on how to implement the preventive system within their local setting.

On global level the Salesian Youth Ministry department of the Salesian congregation has published the “Salesian Youth Ministry Frame of Reference”.  This publication as a resource for inspiration and a tool offering action guidelines for all “Educative and Pastoral Communities” to develop their “Salesian Educative and Pastoral Projects”, respecting both their cultural context as well as the basis foundations of the preventive system.

Don Bosco Youth-Net ivzw brings together member organisations active in 20+ Salesian provinces and 2 Salesian regions.  In between our member organisations there is diversity in “Salesian Educative and Pastoral Projects”.  In the past this diversity has lead to confusion.  Therefore DBYN decided to develop “Few words and a lot of action”, which is our “Salesian Educative and Pastoral Project”.

Developing such a “Salesian Educative and Pastoral Project” on international level is fundamentally different than developing one on provincial or local level.  We need to create a common language which brings together this diversity in cultural interpretations, caters for diversity of Salesian spirituality and welcomes different denominations and non-faith-based worldviews.  Therefore our “Salesian Educative and Pastoral Project” is complementary offering our member organisations, volunteers and young people a reference framework for cooperation.

DBYN works together with international non-governmental youth organisations, other civil society organisations and international institutions.  The language used within the Don Bosco Movement is often jargon-based, making it difficult for external partners to understand our working style.  Inspired by Don Bosco’s letter from the 21st of February 1878 to the Italian minister for internal affairs, Francesco Crispi, in which he uses a secularised language to present the preventive system, we choose for this document a similar approach. We avoid jargon and use standard educational concepts current in the European field of youth work and education.  For example, we opt to speak about DBYN’s educational methodology instead of the Salesian Educative and Pastoral Project of Don Bosco Youth-Net.

To read our educational methodology, please continue to the "Few words and a Lot of Action" page on this website.